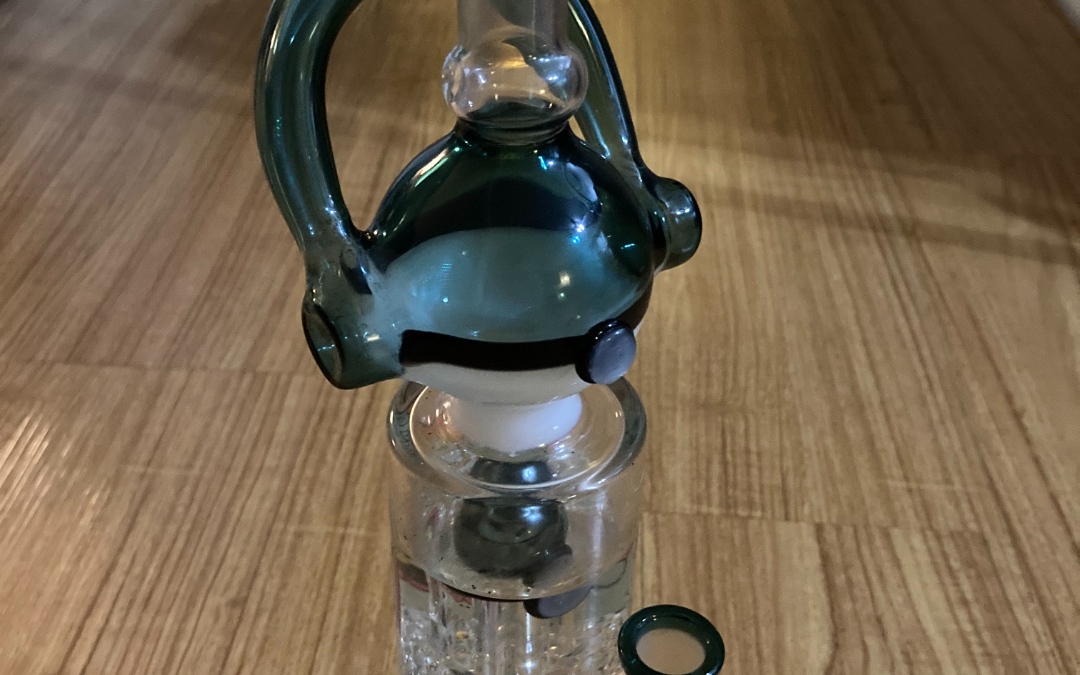 Photos – 1 By Ashley Johnson, 1 from National University of Malaysia

The world of waterpipes and bongs has almost become as popular a symbol of cannabis as the leafy greens themselves. There are now more materials and types of bongs than ever, and each requires their own cleaning routine to ensure the longevity of the piece.

Many newer silicone bongs are set up to be thrown right in the dishwasher, while items like ash-catchers prevent dirt build-up in the first place, making this process easier than ever. However, for those who still clean by hand, there are universal basics of bong cleaning and six general steps to the process.

The first step in any standard bong cleaning is to empty out the old water and rinse the main body with warm water. While doing this, one should try to remove as much debris and chip away at the gunky bits as possible to help oneself out later in the process. If one is nearby a kitchen sink that has a hose attachment for dishes and the water pressure is high enough, one has an instant pressure sprayer for those hard-to-get spots.

The second step introduces the actual cleaning products. Again, here it is important to emphasize that each bong or waterpipe is different, and if one owns a piece that came with its own cleaning instructions – definitely follow those to the letter – with this as a supplement. Also keep in mind the individual parts of a bong: downstem, slider, etc. all may need to be removed to be individually cleaned alongside the main body.

With the first step having done the most basic of cleaning and the bong empty of water, now one pours in the liquid cleaning solution. The most tried and true cleaning solutions out there are rubbing alcohol (the higher percentage, the better) and nail polish remover. Dish soap works too in a pinch, but not as well as alcohol by a long shot. For tougher resin stains, heat up the solution first to make it hotter and more effective.

Step four is another simple one: cover all openings on the bong to prevent leaks or spills in the next step. Cotton balls will usually do the trick in smaller openings, like the downstem area, while plastic wrap and a rubber band are good for around the top of the bong.

The fifth step is to shake the covered piece vigorously. Wait about five to ten minutes for the liquid cleaning solution to soak in, depending on the severity of the problem area(s), then begin the shaking process. Firmly grip the covered areas when shaking to avoid spillage and get leverage on the neck of the bong if it is heavy.

Shake for a minute or two at length and note any areas that will require further cleaning later with a pipe cleaner. While shaking, one will notice the salt doing its job as a light abrasive. The salt rubs against the tough spots of resin in the bong, aiding the scrubbing power of the liquid cleaning solution. If there are still spots in the bong that require pipe cleaners, do not drain the solution before using the pipe cleaners, as it may assist in softening the gunky spots as one scrapes them away.

The final step in the process of bong cleaning is to empty out the solution and salt mixture. Rinse the bong out with clean water several times to ensure there is no trace of the mixture or lingering fumes, nothing tastes worse than hot alcohol!

Once the scent is fully eliminated, the bong is ready for use, and will look brand-new if cleaned correctly. Another great tip when filling a newly cleaned bong is to add a few drops of lemon juice in the water to reduce resin build-up for next time and add a light lemon aroma to the otherwise unappealing scent of bongwater.

For a smoother bong hit, many consumers choose to buy bongs with ice-catchers in them. An ice-catcher, also called ice notches in some places, is a group of idents in a bong’s neck that can hold ice cubes within. While one already knows that bong water is a bit of a petri dish of germs from cleaning, there is a bit to think about in the petri area when using ice too.

While ice is perfectly safe to use if handled correctly, there are some precautionary measures to simply be aware of when using ice. Whereas dentists will tell one not to chew ice because of what it does to teeth, a budtender would urge the same person to not use ice directly from the freezer because of what it can do to the lungs.

Much like the study of ice in bar science, ice in “bong science” sees a change in form and characteristics depending on its environment. In the average freezer ice cube tray, most cubes have a layer of frost on the top similar to the frostbite on an old ice cream pop or the frozen dew on grass on a cold morning. This is naturally occurring ice, but the form of it is problematic.

If those ice cubes are thrown right from the freezer into a bong, that loose frost on top stays on the surface of the cubes, then the first person who uses that bong inhales those tiny ice particles. Those tiny, near microscopic ice balls may not seem threatening, but they can feel like tiny daggers hitting the back of one’s throat and lungs.

Moreover, the act of inhalation also sends those droplets directly into the throat and lungs, where they can do further damage by causing bronchitis or pneumonia in some rare instances, though studies have not proven the direct correlation, yet.

However, while scientific studies on bong inhalation have not given us a study specifically directed at the effects of ice, some studies have shown old bong water is still a petri dish by itself. Take this article by Dr. Agni Nhirmal Kumar from the National University of Malaysia for instance: https://www.ncbi.nlm.nih.gov/pmc/articles/PMC5756717/

“We report a case of marijuana smoking via a “bong” device, which has resulted in severe Pseudomonas aeruginosa necrotizing pneumonia treated with conservative medical therapy,” Kumar says in the article. “This case highlights the importance of recognizing that life‐threatening pneumonia can potentially be linked to marijuana… Inhalation of contaminated aerosol water has been previously highlighted to cause transmission of bacteria 2. Our patient had inhaled contaminated aerosol water that resulted in pseudomonas NP through smoking marijuana through a supposedly “filtered” bong.” 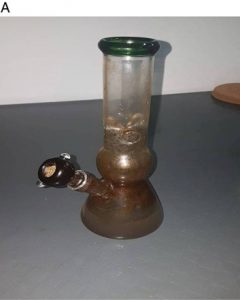 The bong from the study, pictured above, indeed has an ice-catcher. However, a key point of emphasis in this study that makes it a prime candidate for further examination is the size of the bong. Relative to most bongs out there, the one pictured in the study is rather small, possibly making water inhalation by itself more feasible due to its proximity to the mouth. Any stagnant water has the potential to collect bacteria, and transfer from water to ice in this instance seems most plausible for the cause of infection in the patient.

One other complication in the study is the fact the patient also smokes cigarettes, “He reported smoking marijuana daily for 4 years using a small water pipe or bong (Fig. ​(Fig.1A).1A). He was a 10‐pack‐year cigarette smoker.”

A commonsense idea in the situation regarding that patient (and one that can be found in many other articles on the matter in cannabis-centric magazines and journals) is to simply buy a larger bong with an ice-catcher as close to the bottom of the bong as possible to avoid splash contamination and ice shards in general.

However, the most practical solution to stop ice shards from entering the throat and lungs without buying a new bong is to simply lightly rinse the ice cubes with lukewarm water. This eliminates the ice crystals on top and leaves the ice cubes themselves smooth and ready for use.

Proper cleaning and prep are sure to keep one’s bongs in top shape and keep consumers in even healthier shape. While not everyone will follow a strict cleaning regiment, one should always strive to be mindful of their equipment, as it like everything else in life requires regular maintenance.

For those who prefer not to dive in the cleaning process that often, there is one last hack that may let one get away with fewer cleaning sessions, but ironically requires about as much discipline. The best way to clean a bong less is to empty and rinse it daily. If one can get in this habit, it is by and large the most lucrative over time.